The Ninja Kitchen System Pulse has some things in common with other affordable Ninja models at first glance, such as the Ninja Master Prep or Nutri Ninja Pro. It does however come equipped with a few unique features that help set it apart. This article will be focusing on the BL201 and BL204 variations specifically. They both have the same name but have a few key differences to be aware of.

This model has a pretty small footprint, which makes it easy to find space on your counter. It also has a retail price of $99.99 according to the company. I’ll mention any pros and cons to hopefully help you decide whether this is the right blender for you. Onward we scroll to the power section!

All blenders have a horsepower rating. This number gives you a vaguely rough estimate on how well it’ll handle grinding tough ingredients. Things like nuts, dough, or ice for example. The motor in the BL201 variation is 550 watts, while the BL204 is 700 watts. This is one of the key differences between the two. The latter performing a bit better in those demanding situations.

I should point out that both have the power to crush ice or mix dough. They’re each capable machines in terms of performance, especially at their price point. You’ll be able to make the exact same recipes in either one. 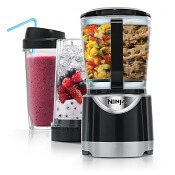 I’ll start off by letting you know there aren’t any manual speed settings on this model. You’ll control everything by pressing down on the various containers when they’re attached. I guess this simplifies things a bit but I do enjoy having more accurate control over speed.

The l has a sort of handle at the top of the lid. Pressing this down is how you’ll activate the motor. The smaller containers require you to press the entire jar into the machine. They’re both easy to operate and most anyone could figure it out. It doesn’t require a ton of force either, so I don’t think you’ll have to worry about your hand getting restless or sore.

In terms of recipes you can enjoy preparing delicate stuff such as homemade salsas or at the other extreme something thick and tough like a pizza dough. You can definitely tell that the machine is getting a workout with something like that. I’ll embed a video so you can see the machine in action. 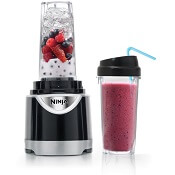 Here’s where another difference appears between the two variations. The BL201 includes two 16oz cups and the BL204 comes with three. This is great if you make a lot of smoothies or cocktails with your blender.
I love these cups because you blend directly in it, once you’re done you just twist on a drinking lid. You can always buy additional cups in the future if you feel two or three isn’t enough. Maybe your place is a social party haven?

Aside from those single serve cups they both also come with a larger 40oz container to make bigger batches of stuff. For attachments you get a dough hook, dough paddle, and lids. The dough hook is to be used for thick pizza dough and the dough paddle is for when you prepare cookie dough.

The Ninja Kitchen System Pulse performs well if you’re looking for a basic blender and want one that comes with single serve containers and/or the ability to handle dough recipes. It actually sorta feels like a melding of the Ninja Master Prep and Nutri Ninja Pro models. I recommend checking those articles out to see how they compare. Overall this is more versatile than either of those in a way because of the container variety being offered.

I know it can be difficult deciding which blender to get. There are so many different options you can choose from that are around the same price. You’ll need to consider the pros and cons of the machine and decide which features are at the top of your list. Think about what you’ll realistically be using the blender for and hopefully that’ll help narrow down your choices. Thanks for reading and good luck!

Visit the following buttons to view the current prices and deals running on Amazon!