The Vitamix V1200 provides a lot of performance and versatility, as you’d expect from a high-end blender from this popular brand. At first glance it may seem very similar to the Ascent Series of their blenders, and in many ways it is, but there are a few key differences involved here.

There is the beastly 2.2-peak horsepower motor, a manual control dial, and digital timer among other common features; but, you’ll notice that there aren’t any automated presets directly on the machine. This is because the machine is meant to be linked up wirelessly with your smartphone via Bluetooth, and that’s where they’ve moved all of the preset modes. 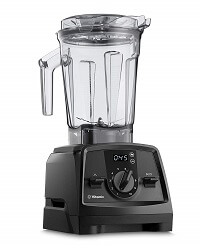 Of course the main question is whether this model is the best fit for your own needs. There are several models available and I know that it can be overwhelming to figure out which one is the right one for you. This is even more true when this blender appears to be so similar to other models. I’ll try to review what’s new and unique to help you make a smarter buying decision. I’ll jump right into the wireless connectivity of the blender.

There has been an official mobile app called “Vitamix Perfect Blend” which can be downloaded for free on iOS and Android devices. This app syncs up with your Venturist blender and is used to wirelessly send presets and commands to the blender. It’s also intelligent because it will display different commands based on which blender container you have on top of the machine. So, if you have a dry grains jar loaded up, it’ll show presets for that specific jar. Likewise for the other smart containers as well. It definitely looks and feels modern to have this type of functionality on-board.

The app has several presets that you can choose from. These presets will send automatic programmed modes to the machine and run a timed cycle. The main benefit to this is that you get consistent results every time since it runs for the same length and gives the right amount of power. Having an app to control all of this can be a pro and con depending on your preference. There are a total of 17 blender programs on the app which is far above the typical 6 or so you find on older models. But you’ll need to be using your smartphone to have that capability. I’ll embed a video that shows how the app works in detail so you have a bit more information and understanding of it all.

I’d say the best advantage to controlling things via the app is that it can be updated to add new features much more easily. You could have new functionality or other improvements with a simple app update, whereas the preset programs on older models are static and can never be changed nor tweaked. It’s really going to come down to personal taste on how you feel about this.

The base of the V1200 is capable of detecting which smart container is currently placed on top of it. They’re specifically called “Self-Detect” versions, and that’s what you want to look for, as they’ll automatically update the app’s functions based on the size and type of jar being use. They have several varieties available including an: 8oz blending bowl, 20z blending cup, 48oz dry container, 48oz wet container, and 64oz wet container. I’ll point out that the wet types create a vortex to suck ingredients down and the dry types create a tornado that throw ingredients upwards. 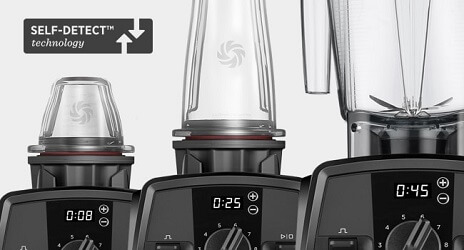 It’s important to note that these new jars are different compared to the older containers from Vitamix. Even more importantly, the old jars can NOT be used with the new blender because the machine will not be able to “detect” them as they don’t have the “smart” technology built inside. However, the new jars can be used on previous models without any issues. I suppose you could purchase the new jars now to use with your current Vitamix and be future-proofed when you’re ready to upgrade to a smart machine down the line.

Update May 18th 2022: Don’t leave the site without viewing this Amazon offer first! Save some money off the $630 retail price by considering a certified renewed model, professionally inspected and approved.

It may be a bit disappointing for some but the company has been making big technological advancements in the past few years for their blenders. They had to make a choice and apparently it seems like they felt it was best to make a clean break from the old models. It makes sense in order to push forward what the blenders are capable of and have a seamless experience. But yeah, if you have older jars it could feel like an annoyance to some. 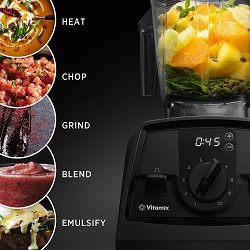 The Venturist model comes equipped with the typically powerful 2.2-peak horsepower motor inside. This provides enough performance to crush raw ingredients for whole fruit juice or turn your favorite nuts into a smooth creamy homemade nut butter. Vitamix models are known for all of this and that’s one of the reasons people love purchasing them. They’re really good at outperforming other brands and giving you high-end results.

I think Vitamix is to blenders; as Kleenex, is to tissue paper. Having this type of performance allows the machine to do the job of other appliances. So, the power inside will crush ice into snow, it can mix dough, it’ll double as a food processor, ice cream maker, hot soup maker, meat grinder, and more. It’d be nice having one device on your kitchen counter without having to get multiple appliances out from underneath your cabinets. 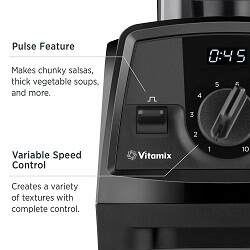 There are actual manual controls located on the front of the base. Here you have a pulse switch, a variable 10-speed dial, a digital timer, and on/off switch. You’ll use the pulse feature when making recipes that don’t require complete blending; something where you just want to chop the ingredients a bit. The manual dial gives you complete control over the blending process and allows you to fine-tune the blend exactly the way you want it. It’s nice being able to have the modern advancements via the app while still retaining manual functionality for those that prefer it.

The jars that are included with a brand new blender is the 64oz low-profile wet variety, 20oz blending cup, and 8oz blender bowl. You also get a cookbook titled “Simply Blending”, a low-profile tamper, blade scraper, and tamper holder. If you get a renewed blender it typically comes with just the 64oz container, 20oz blending cup, tamper, and cookbook. So buying a renewed product will have you missing out on the 8oz bowl, blade scraper, and tamper holder. 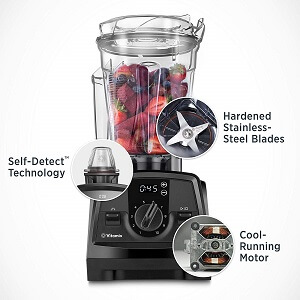 It’s obvious that the Vitamix Venturist 1200 blender has a ton of modern features, offers up a wicked amount of power, and is versatile enough to do the job of other appliances. It differs from the Ascent Series in that some of those do contain on-board presets. If you’re really into having preset modes built directly into the machine I’d recommend checking out the A2500 and A3500 models.

Another great thing to mention is the insane 10-year warranty that comes with a brand new product; the renewed versions only have 5 years, but that’s still a crazy amount of time as well. The warranty is doubly better than cheaper brands because the Vitamix company will actually pay shipping both ways when handling approved repairs/issues. This should surely give you some peace of mind in the long run and is one of the best parts of owning a Vitamix blender. If you have problems that arise within the next decade you’ll know that you’ll be taken care of and have a product that’s going to work for you. Many other brands don’t offer a warranty as long as this nor do they pay shipping for returns.

I don’t think you’d go wrong with getting a V1200 but be aware that it will need to take advantage of your smartphone in order to get the full benefits. The app has over 500 recipes, 17 blender preset modes that can be wirelessly sent to the machine, and will automatically detect which smart container is being used. If you aren’t very interested in the app aspect of the blender I’d probably point your towards the Ascent A2500; that at least has presets for smoothies, hot soups, and frozen desserts.

I’ll include some links below to the newest running offers. Amazon is currently offering a “Renewed” model which is backed by their Amazon Renewed Guarantee. This means that the product is eligible for a replacement or refund within 90 days of receipt, if it does not work as expected. Visit the links below for more information and product details. I’d absolutely recommend that you add the product to your shopping cart in order to see a total price with any tax, shipping, discounts, or fees.

"As an Amazon Associate I earn from qualifying purchases."