The JAWZ blenders come in three unique variations to cover a wider range of needs and uses. At the high-end sits the “Precision Touch” model with its handy auto presets. But are these important? Do you need a blender with a lot of flexibility and control or do you just want a powerful basic blender? There are several questions to find answers to so you get the best product for yourself. 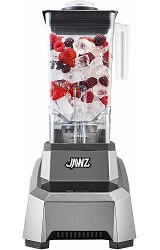 I’ll review all of the features and also how each model differs from each other. Maybe you’re interested in the machine but you’re having trouble deciding which one to get. No worries, I’ll try to make everything clear and easy to understand. I’ll start by talking about the overall performance.

All three models come equipped with the same super powerful 3.5 peak horsepower motor. This is very large and is capable of turning ice into snow or any ingredient into a silky smooth consistency. It’s actually enough power to grind grains into homemade flour, which is pretty crazy. Watch the following video to see this blender pulverize ice against a Vitamix 780, you might be surprised by the result.

If you’re into drinking nut milk as an alternative to cow’s milk, you can also use any of the JAWZ high performance blenders to make your own from your favorite fresh nuts. Having this much power will allow you to perhaps get more creative knowing the blender will be able to handle practically anything you throw at it. 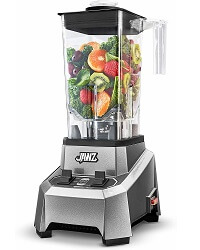 The first model I’ll be going over is called the “Toggle Switch” version. This variation has controls similar to the Vitamix TurboBlend, in that, there’s an on/off switch and a low and high speed switch. So, there are limited controls but you still have the high-end power at your disposal.

I’d say both low/high modes can cover the majority of recipes you may want to prepare. There’s also a pulse function for more delicate dishes where you only need to chop or combine ingredients. On the front of the panel is a count up timer to help you keep track of blend times as well.

The next step above that is the “Variable Speed” blender which gives you finer control over the speed of your blends. There are 10 manual speeds to dial in on and this lets you provide precision power for each specific recipe. There’s also a pulse feature and 99 second count up timer for more versatility.

Perhaps a low and a high setting aren’t enough for you and you like to have more control, this would be the model for you in that case. The variable speed dial definitely gives a bigger range to work with. 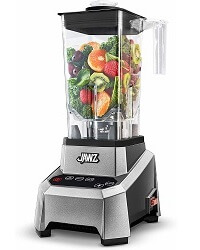 At the top end is the “Precision Touch” model which includes the 10-variable speed dial but also adds 3 automatic presets. The modes installed are smoothie, ice crushing, and cleaning. These are preprogrammed blending cycles that will give you consistent results every time you use them.

The auto modes can be helpful if you’re doing multiple things in the kitchen and trying to prepare everything. With this model, just select whichever preset mode you want to use and the blender will take over. When it’s finished you’ll be good to go.

The cleaning preset can also help make cleanup a bit more convenient for you. Though just to note, you could do the same things but you would just have to do them manually. Adjusting the speed and blend times yourself. If you prefer convenience and consistency this would be the model to consider.

There aren’t many things included with the JAWZ blender when you receive it. You do get a large 64oz blender container which is made from a BPA-free material. It has measurements printed along the side to aid you when adding your ingredients. The cap of the lid also doubles as a 1.5oz measuring shot. You do get a 22 recipe booklet included to help you get started blending right away. The recipes are colored and easy to follow. 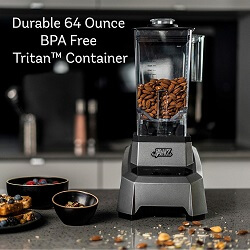 The JAWZ High Performance blender variations all have a ton of power to do the job of other kitchen appliances; it can be your food processor, a juicer, and more. There’s enough performance to crush frozen fruits for homemade smoothies or turn ice into snow within seconds. It’s comparable to other high-end brands though be aware that you cannot make hot soups in the machine like you can in a Vitamix. There are pros and cons to that I suppose. Heat isn’t transferred as much into your recipes so you don’t have to worry about icy recipes melting during prolonged use.

If you just want a really powerful blender that is versatile with its functionality I’d say it’d be a great choice. You may have trouble deciding which model to get though. If you don’t mind having to manually control everything I’d recommend you go for either the Toggle Switch or the Variable Speed version. The automatic presets are really for people that need the convenience and want the blender to be able to take over. Being able to automatically run blending cycles can free you up to take care of other things. It all comes down to your preferences and what you might be using the machine for. 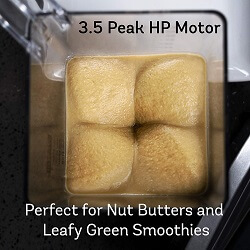 Ask yourself if you need the 10 variable speeds, if not, go for the Toggle Switch model and save a little money. Otherwise it might seem obvious which one to get after reviewing their various aspects and how they compare. The controls are really the only differences and you’ll have to be the one to decide if the added control is worth the added cost. I think just about anyone would be pleased with the performance and it seems like it’s comparable to other high-end, and more well-known, brands. Good luck choosing the version that’s right for you!