The Vitamix TurboBlend Two Speed is one of the most affordable blenders being offered from the Vitamix company at just $399 MSRP. It sits at the low-end in terms of price but also in features. It provides very basic speed choices which limit your control. The company has also made a Vitamix TurboBlend three-speed which has a bit more flexibility if you’re interested.

In this article, I’ll talk about the pros and cons to help you decide whether it’s the right blender for you. Not everyone needs automatic preset controls and manual speed dials. This is a very specific type of blender and requires a specific type of person to enjoy it. There is a TurboBlend “VS” model, but it’s just a relabeled Vitamix 5200 so I’m leaving it out. I’ll keep to my usual format and talk about the power first, let’s get started! 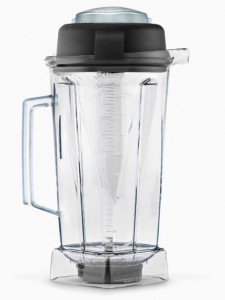 This is a blender from Vitamix so of course, it contains a massive 2-peak horsepower motor. It’s the same motor found in the other C-Series blenders. This allows it to blend just as well as any other popular model, such as everyone’s favorite, the 5200. It’s capable of devouring any ingredient you throw into it, including raw nuts. If you’ve only ever used mass-market blenders before you’ll be in for a surprise when you first use the machine. Nothing really slows it down and the included tamper helps ensure everything is combined thoroughly. I’ll point out that this model uses the typical 64oz wet-style jar.

Since the motor is so large, it does produce quite a bit of noise. I wouldn’t say you need earplugs but I suppose it depends on how sensitive to loud noises you are. All of these high-end blenders can be a bit loud at times so it really shouldn’t be too much of a shock in my opinion. I’ll mention that most recipes from the included cookbook can be made in 60 seconds or less though. So the machine won’t be on for too long anyway.

There’s a lot of heat that’s generated from the motor, this is what causes your soup recipes to cook and start steaming. You don’t have to worry about it overheating though. Air is sucked into the machine to help keep the blender operating smoothly. There’s also a safety feature built-in that will cause the machine to shutdown on its own in the event of excessive heat. Perhaps the air intake slots accidentally become blocked as an example. I’ve never run into this with any of the Vitamix blenders I’ve used but it’s nice to know the feature exists, just in case.

So power-wise the TurboBlend is pretty comparable in terms of performance with other models. This section will talk about the biggest difference, one that sets this blender apart from your other choices. I’ll start by showing you exactly what your speed options are on the control panel. On the left, you have a switch that allows you to select between “high” and “low”. On the right, you have your usual on/off switch. That’s all you get to choose from on this machine.

Now your first reaction is probably the same as what mine was. That it seems too limited compared to other models and you’d miss your manual speed dial. It’s true that you might, but I recommend that you think of it as being exactly like a Vitamix 5200 that merely lacks the full 10-speed dial. It performs the same, has the same motor, and the same jar. You just can’t manually select the speed.

Now think about the blender recipes you’ve read online. They typically require you to start at a low speed and gradually turn it up to a high speed. That got me thinking a bit, I never set my Vitamix to just use a specific speed between 1 and 10. Everything I’ve made starts at the lowest setting and is quickly turned up to the max speed. So really the lack of the speed dial isn’t as big of a deal as you may think. The recipes in the included cookbook are tailored to the controls but you could adapt other recipes for it without too much trouble. You can still make your hot soups, smoothies, and frozen desserts in it. Some delicate tasks will be more difficult though. Salsas, for instance, require an on/off tactic to pulse the mixture more carefully. It can be done but having a speed dial and pulse button would make it much easier.

Now I’ve embedded a video from QVC showcasing exactly what this model can do. This way you can see it in action for yourself. 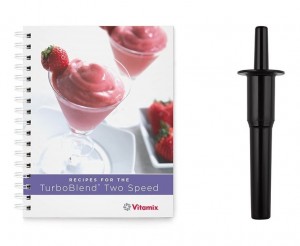 This model is a nice option for the people that only want a basic high-powered blender. It does lack the manual speed settings of the other models that give you more control though. You’ll have to be the one that decides whether that matters enough to you. Either way, it’s still a big upgrade if you’ve only ever used mass-market blenders. It offers the same power found in other Vitamix blenders, so it definitely won’t struggle with any recipe you make.

Inside the box you get a cookbook, tamper, 64oz wet-style jar, and a 5-year warranty. This is a slightly less amount of time than other Vitamix machines, which typically include 7 years. It’s still a really long warranty though and these machines are built to last. In the event anything goes wrong you’ll be able to get it fully repaired within that timeframe. As long as the damage wasn’t due to human error of course. Vitamix even pays the shipping fees when handling warranty claims.

This decision is ultimately yours and it really depends on how badly you need that precise speed manipulation. You may have trouble with recipes that require a more gentle touch, but overall I think it performs well for what Vitamix intended the machine to be. Think about what you’re looking for in a blender and what’s important to you. Hopefully, you can narrow down whether this model suits your needs. I’ll include some current prices and deals below if you want to take a further look at the model. Thanks for reading!

Amazon is currently offering a certified refurbished TurboBlend. It comes with the same 5-year warranty and a 30-day money back guarantee. Every unit undergoes a 17-point quality check to make sure it works as it should. Click the following button to view the item. You really don’t wanna leave the site without viewing this deal!

If you’re interested in the Vitamix TurboBlend Three-Speed blender instead, check out the following link for more details and offers currently available.