The Vitamix Ascent A3300 blender is a unique model from the new Vitamix product line. It has a retail price of $520, which is the same as its sibling, the A2500. It’s also powered by the exact same 2.2-HP motor. This means there’s a ton of performance inside to handle advanced or difficult blending tasks. 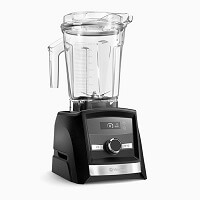 One question you may have though is whether you should buy this model over the A2500 if they’re the exact same price. I’ll go through and review the various differences to help you decide if this blender is right for you. Let’s begin with the functionality and features first.

The main feature on this model is the programmable timer. Pressing the “+” and “-” buttons lets you set a specific time for the blender to run. The blender will countdown from the set time and automatically turn off when it hits zero. This is really what sets it apart from the sister model, the A2500, which features 3 automated presets in comparison. Having a programmable timer could give you a bit more flexibility and convenience, but you’ll need to figure out the exact amount of time needed for each recipe.

Unlike the majority of older Vitamix models, the A3300 has a much more futuristic design. This is a welcome change in my opinion as the previous blenders have started to seem a bit dated visually. You’ll find an LCD screen and digital buttons instead of the usual analog switches and buttons you may be used to. There’s also built-in wireless connectivity so the machine can evolve in future years. It’s definitely more future-proof in terms of expanding its capabilities over time.

The control panel features an almost entirely digital interface. The only physical control on the front is the variable speed dial. You can use the speed dial to manually adjust the amount of power provided during each blend. This is great for when you’re preparing a recipe that requires complete control that you don’t want to over-process. The dedicated pulse button allows you to lightly chop ingredients in the container as well.

This model has a large motor capable of putting out 2.2-peak horsepower at 12 amps. It’s actually more powerful than some previous models, which had a rating of 11.5 amps and produced only 2.0-HP. This means the blender will tear apart ingredients without even breaking a sweat. Earlier models are known for being outstanding performers when it comes to blending difficult ingredients. The A3300 just takes it a little step further. 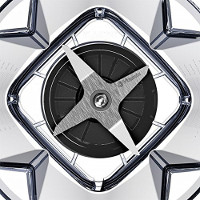 Since there’s so much power here, that also means there’s a lot of heat produced when the blender is run over a certain amount of time. The heat is transferred right into your blending mixture. It’s actually how you’re able to prepare hot soups directly in the container. You aren’t able to do this with most mass-market blenders such as the Ninja brand. It’s a really nice feature and a great use of the machine while you’re preparing the rest of your meal for dinner.

It’s important to note that you shouldn’t have to worry about the machine overheating for any reason. Air is sucked into the base of the blender to help keep it cool. There’s also an electronic protection that will automatically turn everything off in the event the heat gets too high. An example scenario for you, maybe you accidentally block the air vents with a towel unknowingly.

As I previously mentioned, the design is pretty striking if you’re familiar with other Vitamix models. Everything has a high-quality appearance, from the touch-sensitive buttons to the digital LCD screen. It all gives the visual impression of a true next-generation blender. Yet, the retail prices are actually pretty similar to the older models, which is always nice. 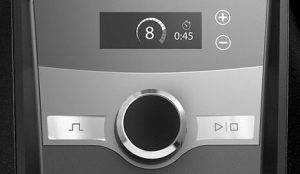 Another great thing about the A3300 blender is that it comes with a low-profile 64oz container. This means the overall height is reduced down to about only 17 inches. Vitamix blenders that use the standard container have a height of around 20 1/2 inches. You may have to measure the height under your cabinets to ensure it’ll fit, but it’s noticeably shorter. This means you should be able to store the entire machine with the container attached.

There aren’t too many accessories included in the box. You have a plastic tamper which you’ll use to force ingredients down into the blades. It’s great when you’re making a thick recipe like hummus or homemade peanut butter. You want all of the ingredients to get blended thoroughly and the tamper helps with that. It also comes with a cookbook so you can get started on your enthusiastic blending adventure right away. 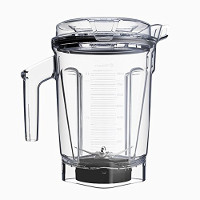 The blender container is the most interesting part, as it includes a feature called “Smart Detect”. This allows the base of the machine to detect what size jar is currently attached. It’ll then adjust certain settings accordingly. I’m curious to see where Vitamix takes this feature and what accessories might release for it. New container sizes will be released in the near future according to the Vitamix company.

The Vitamix A3300 blender brings improved performance along with a programmable timer feature. It’s a unique offering targeted towards anyone that wants to multitask in the kitchen and have the machine turn off at an adjustable time. You can choose exactly how long the blender runs for a wide range of recipes.

Being able to have the machine run for a certain length allows you to step away or have consistent results each time. The alternative model is the A2500 and comes with three auto preset modes. You’ll have to be the one to decide which feature you find the most appealing. Would you use a programmable timer more than default preset modes that you can’t alter?

Before I end this I should talk about the fact that the A3300 blender has a very long 10-year warranty included. You’ll be covered if something happens due to its own fault or malfunction. The Vitamix company will even pay shipping both ways for valid warranty claims. Having this long coverage really adds value to the machine and helps justify the cost. You can relax a bit more knowing you’ll have a high-end appliance that’s going to last for at least a decade.

Check out the following buttons and links below to find the latest prices and deals. Try adding an item to your shopping cart to view a total cost.