The Vitamix 5300 has a retail price of $560 and is part of Vitamix’s legacy series of blenders. This is an older model that lacks many modern advancements, such as wireless app functionality, but does that automatically mean it isn’t a good choice for you? Of course not, many people are perfectly fine with having a straightforward machine without too many complexities. Some people might assume that the 5300 is similar to the very popular Vitamix 5200, but it’s actually much closer to a Vitamix 7500 in terms of specifications and features. 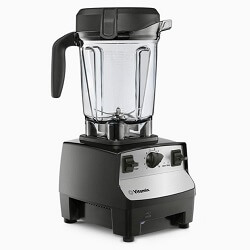 I’m well aware that the numbering of Vitamix models can seem confusing at times. I feel like Vitamix has gotten a lot better at this in recent years at least with their new Ascent Series. But for these legacy models, for instance, the Vitamix 500 is basically just a rebadged Vitamix 6300 with a different cookbook. I’ll do my best to point out the similarities and differences this model has in order to make your blender buying decision a bit easier.

The overall size and multiple ratings of your motor help determine the amount of raw power available to you. This high performance allows the blender to handle blending difficult ingredients much more easily. Something like ice can be crushed into snow, yet the blender is still capable of chopping soft ingredients. This model comes equipped with a large 2.2-HP motor running at 11.5 Amps.

The Vitamix 5300 is capable of crushing things like raw nuts, vegetables, and ice without breaking a sweat. You’ll even be able to make fresh juice using whole fruits and vegetables if you want to. The powerful motor is able to blend everything into a super smooth consistency no matter what the ingredients are. Many of the mass-market blenders you see on store shelves struggle to handle these difficult tasks.

I should also point out that this motor is larger and newer than the one found inside the 5200 model, which is only rated at 2.0-HP and 11.5 Amps in comparison. So you’ll have more power to deal with thick recipes and similar demanding situations.

All high-end blenders that have a motor this large produce a decent amount of noise at their highest speed. That is unless you get a “stealth” model that utilizes an outer container to dampen the noise. But those do tend to be much more expensive though. Due to the updated parts, such as the low profile jar, the 5300 is actually a little quieter than models that use the taller container.

There’s a lot of heat produced during extended blending sessions. The blender has a radial cooling system that sucks in air and rapidly blows it over the motor to help cool it down. The faster the speed, the more air is sucked in for cooling.

There’s also a safety feature that will automatically shut the blender down in the event of excess heat. Maybe the vents are clogged by a towel you have underneath it or some other scenario. You probably won’t experience this but it’s nice to know it’s there to protect your machine. If you want to have reduced noise you can blend at slower speeds and utilize the pulse switch. Pulsing is perfect for preparing delicate recipes and allows you to have more control over blending softer ingredients. 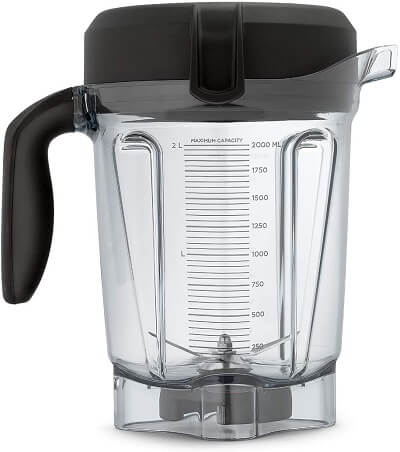 When buying this blender model you’ll receive the BPA-free 64oz low-profile container. There are a few benefits to this version of the jar. For starters, it’s shorter, so it’ll likely fit underneath your cabinets without any issues. Some people complain about that with the taller jar. Those people are usually required to set the jar next to the base instead of leaving it attached. A minor inconvenience, but still something to mention.

The stainless-steel blades are longer in this low profile jar than in the tall jar, 4 inches instead of only 3 inches. These blades spin at a slower RPM which is what helps make the blender a little quieter in terms of noise. As an added benefit to the container design, most people state there’s less tamping required compared to the taller jar. There are obviously a lot of perks to buying a Vitamix with this type of container.

You’ll find that the controls are pretty basic on the Vitamix 5300 model. There’s a radial dial that goes from speeds of 1 all the way up to 10. You’re able to have full control over the blending process with this dial. Choose to use a slow speed or the dedicated pulse switch when making salsas to prevent everything from blending too much. Alternatively, crank the speed up to full blast to make hot soups or healthy nut butters.

The motor itself is directly connected to the blades, which allows heat to transfer into whatever you’re blending. Leaving the blender on for an extended amount of time gives you the ability to make soups that are boiling lava hot. It usually doesn’t take too long, maybe around 4-5 minutes depending on the recipe you’re using and the size of the batch. Have you ever considered using a blender to make a hot soup? This would free up some space on your stove when you’re making other food.

Most other recipes can be finished pretty quickly, so the heat isn’t usually an issue when you’re preparing something else. Some recipes do tell you to add ice cubes to counteract any heat if it requires more mixing, such as a smoothie. You can make frozen desserts in this model so it’s pretty versatile overall with what’s possible.

The Vitamix 5300 is an improvement over the 5200 and is actually very comparable to the 7500 model. The shorter container allows you proudly display the entire blender on your kitchen countertop. Having the longer blades spin at a slower speed helps make the device a little bit quieter. Then there’s the powerful 2.2-HP motor inside, which is capable of handling a huge variety of tasks. You can see why this model would be a great option for most people.

There aren’t too many things that are still made in America. A Vitamix is produced, typically, with at least 70% of parts originating from the USA and is fully assembled here by American workers. This is accurate at the time of this original post. It’s a wonderful fact to be aware of when you consider buying a Vitamix blender.

I’ll also quickly mention that the Vitamix 5300 blender comes with an incredibly long 7-year warranty. That includes parts, labor, and free shipping both ways. As long as the issue isn’t caused by human error of course, the company will then replace it within that 7-year amount of time. So you can rest easy knowing you’ll be buying a product that’ll last. This is honestly a huge perk to buying a Vitamix over a cheaper alternative.

If you’re still having trouble deciding whether this is the best model for you, try writing down what your most desired features are in a blender. Hopefully that will help you narrow your choices down. In my opinion, this is another solid Vitamix offering and you couldn’t go wrong by choosing it. Though there have been newer models like the Vitamix A2500 which offers many more advanced features and smart capabilities.

I’d recommend checking out this model on Amazon. Be aware that the prices tend to fluctuate pretty frequently, but you can often find some good deals running. Click the buttons below to be taken there directly. You can also consider an officially “renewed” model to save a bit of money off the retail price. These come with an Amazon 90-day renewed guarantee and a full 5-year warranty!

Brand New Vitamix 5300 Offer
Vitamix 5300 (Reconditioned) Offer
"As an Amazon Associate I earn from qualifying purchases. This does not affect the integrity of our content."