The Vitamix 300 Professional Series is part of the G-Series blenders from Vitamix and has a retail price of $559. It uses the stubby jar which allows the entire machine to fit comfortably underneath your cabinets unlike some other models. Think of it as a Vitamix 750 in terms of power and design but without any preset modes.

This unit retails around $80 cheaper than the 750 though, so it’s a nice alternative if you don’t really care about those. I’ll try to cover as much information as I can in this article, including any pros and cons. I’ve said this before but it’s really important to get a blender you’re happy with and that has the features you want. 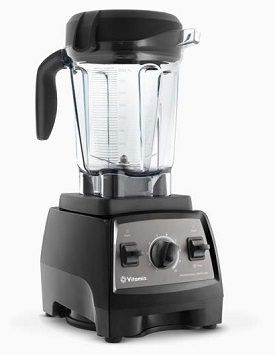 Since this is part of the G-Series you get a 2.2-peak horsepower motor inside. This is more powerful than the motors found in the older C-Series blenders. It means you’ll have even more power at your disposal when preparing difficult thick recipes.

It can easily devour many hard ingredients where other cheaper blenders would falter. If you’ve never used a high-end blender before you’ll be surprised at how smooth the consistency is when using this Vitamix. There is a tamper included that can help push everything down into the center of the vortex and ensure everything gets blended perfectly.

The motor is so large that it will actually heat up the liquid inside your blender container. This is how you can making piping hot soups with the machine. You don’t have to worry about that when making a smoothie or juice since the machine isn’t usually on long enough for it to heat up. To prevent that you can add a few ice cubes though to keep everything extra chilled. Many of the recipes in the included cookbook can be prepared in under 60 seconds, so overall it’s pretty versatile with what it can do.

Some people have asked whether they should be worried about their machine overheating. The answer to that is a resounding no. The blender is designed to suck in air as it runs to help keep it cool. Even in the event of the vents getting clogged, the machine has a built-in safety feature that will shut itself off to prevent any damage from occurring. I haven’t heard of this ever happening for anyone but at least you know it has a feature to protect itself.

There’s an on/off switch, a pulse switch, and a full 10 variable speed dial located on the front of the Vitamix 300. This gives you total control over your blends. It does lack any sort of automatic presets which is probably the biggest drawback for some people. If you don’t care about them it’s a complete non-issue though. I personally really like them most of the time but it’s honestly just a convenience thing. Even without them it performs just as well as models that do have them.

You can make a wide variety of recipes in this blender, some of which might surprise you. I’m sure most people will be making standard smoothies or fresh juice, but there’s so much more you can do with it. I already mentioned the piping hot soups, those get so hot that steam will actually rise out of the container. The jar is vented to allow steam to escape so you don’t have to be concerned about pressure building up. Making ice cream in the blender is another unusual thing, especially with all this talk about heat and steam. There are recipes available to make homemade sorbets and dairy ice cream though. Nut butters are also really popular with Vitamix blender owners. Add your favorite nuts and the blender will release the natural oils contained within to help blend everything into a smooth paste. Those are just a few quick examples and shows the versatility of every Vitamix. 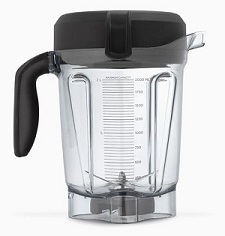 One really nice thing is that the Vitamix 300 is slightly quieter than older models. From what I understand it’s due to the longer 4″ blade design and slower RPM of the 64-ounce stubby jar. You don’t lose any performance though, it will still tear apart any tough ingredient or thick mixture. So it’s more powerful while also being quieter, that’s a pretty amazing feat if you ask me. I’m not really sensitive to the loud noise since mine are never on for very long but I know some people care about that sort of thing.

I’d say the Vitamix 300 is a great option for anyone that wants a high-end blender and doesn’t care about having preset controls. It offers outstanding performance that edges out the C-Series thanks to the new jar design. It’s slightly easier to clean and a bit quieter during operation. There’s no question that this model is a huge upgrade if you’ve only ever used cheap machines before. It basically gives you commercial quality for home use.

You do get a full-color hardbound cookbook, tutorial DVD, tamper, 64-ounce stubby jar, and a super long 7-year warranty. That’s right, your blender is covered for 7 full years! Even better, Vitamix will pay shipping both ways when dealing with warranty repairs. As long as it didn’t break due to human error of course. That’s a really long time of coverage though and shows just how much the company stands by their products. It definitely gives you some peace of mind knowing this is a blender that’s going to last.

I mentioned this earlier but the total height of the machine is 17.4″ with the jar on. That means this model will easily fit underneath your kitchen cabinets. The C-Series is a bit taller by comparison, and a minor annoyance for some people is that you usually have to take the jar off in order for it to fit. Overall this is one of the best blenders Vitamix makes in my opinion. If you do want a model like this but that has automatic presets I’d recommend checking out the Vitamix 750 article for more information. In the end, the choice is yours and it’s important to get something you’re happy with. Ask yourself what you’re looking for and narrow your options down based on that.

Check this model out on Amazon to find the current price and read more details.