The Blendtec Designer 625 blender is part of the newest Blendtec model line and retails for $480. It comes equipped with many convenient features including four automatic preset modes and an illuminated timer that displays the remaining time of your blends. It’s also available in seven different colors to fit your own personal style. If you happen to be in a rush, jump down below to read the conclusion and view the current deals. 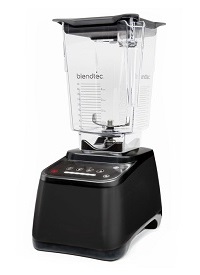 In terms of the product line, it’s a step below the 675 model which is priced at $80 more. I’m sure some of you are curious as to what the differences are and whether it’s worth saving that money. I’ll try to cover as much information as possible in this article to help you review whether this model is right for you.

The first thing you’ll probably notice about the machine is the illuminated capacitive touch panel. This is the same type of touch technology used in smartphones and tablets. You have the ability to select from six manual speed settings, four preprogrammed modes, and a dedicated pulse button. There’s also a timer that will show you how much time is remaining when you use the automatic presets.

There are only six manual speed settings but I feel like they each provide plenty of differences in power. The 725 model, for instance, offers 100-speed settings but you’re not really going to tell a difference between speed 82 and 81. That’s why six speeds is likely enough for most people.

I mentioned this model includes four different pre-programmed modes to choose from and they are the following: smoothie, ice cream, whole juice, and hot soup. These are likely the most common and most used presets for most people. Selecting one of these allows the blender to do all the work. You add your ingredients according to a recipe, select a preset, and the machine handles the entire blending process automatically.

The pulse button functions in two different ways. The first is as you’d expect, pressing the button while the machine is off will give your mixture a quick jolt of blending. That’s pretty standard for most blenders. You can also press the button at any time while the blender is in use though to give an extra boost of power.

You’ll find a giant 3.0-horsepower motor inside this blender, which is the standard motor size now for most Blendtec models. The original Designer Series came equipped with the same rated motor. In fact, I’d say the 625 is the closest model to the original in terms of its overall power and features. You won’t have to worry about smoothies or other recipes coming out chunky. Having such a powerful motor allows you to turn ingredients into a smooth silky texture.

When the blender is in use, the motor heats up exponentially. This action causes whatever you’re blending to heat up as well. It’s actually what allows you to make steaming hot soups in the machine. Many recipes can be completed in under 60 seconds though, so it shouldn’t be much of a concern for most things you make. This is the same for every high-end blender.

Don’t worry about the blender overheating or any damage long-term. The machine sucks in air to help cool the motor. It even has a feature that shuts itself down in the event the airflow openings get clogged for some reason. I’ve never had this happen to me but it’s nice to know this safety feature exists.

To get an idea of the power in these machines I’ll embed a video from Blendtec’s popular “Will it Blend?” YouTube web series. You can see the blender grind ridiculously hard items such as the new Apple Watch. If they can handle grinding through metal and electronic components I’m pretty sure it’ll handle some tough fruits and vegetables.

Well the negatives are pretty standard as far as high-end blenders go. The machine does get a bit loud at its maximum speed setting. Though it’s important to note its at least quieter than the 675 and 725 models due to having a 3.0-horsepower motor versus a 3.8-horsepower motor. I don’t think it’s a huge shock since it provides so much power.

I’ll remind you that most recipes can be completed in under 60 seconds so the machine isn’t on for extended periods of time. I’ve also had some success at reducing the noise even further by placing a rubber mat underneath the base.

The Blendtec 625 offers a lot of performance and features compared to some other options. You don’t have to worry about it struggling with tough ingredients and the included preset modes make things so much more convenient. You’ll be able to handle the thickest recipes you can find.

It’s $80 cheaper than the 675 model with the differences being the 675 has two extra manual speeds, one extra “clean” preset mode, a 3.8-HP motor versus 3.0-HP, and an “Add 10” seconds button. You can read the full article on that model here. You can save $80 if those differences aren’t important to you.

You also get a crazy long 8-year warranty. If anything unfortunate should happen that isn’t caused by human error, you’ll be able to get your machine repaired during the course of that time. Blendtec even pays shipping both ways when dealing with warranties. That’s not something you’ll find on cheaper blenders.

This model might just hit the perfect balance between price, features, and performance. You’ll be the person that has the final say though. Ask yourself which features you really want to help narrow down your choices. I guess I should quickly mention that Blendtec does offer a 30-day money back guarantee. Hopefully, all of this information helps you in your quest to find the perfect blender.

Click the button below to visit the product page for this model and see the latest offers and prices.

If you’re open to buying a certified renewed unit, click the following button to view the current deal.